Vacation: A Necessary Prescription for a Healthy Life

This week, I embark on a vacation – my first – in more than two years. That seems rather sad, right? It’s certainly not healthy; I’ll admit that freely. But come on, admit it…I’m not alone. Per the U.S. Travel Association, Americans collectively did not use 662 million vacation days in 2016. More than half of all working people in the United States forfeited paid time off at the end of the year.  Self-employed people suffer the worst — if they aren’t working, they are actually losing money. The process of vacating must be a prescription then, as surely as any other, for our health.

Look it up in the dictionary:

“Meanings ‘state of being unoccupied,’ ‘process of vacating’ in English are early 15c. meaning ‘formal suspension of activity, time in which there is an intermission of usual employment’ (schools, courts, etc.) is recorded from mid-15c.”

Historically, recreational travel – i.e. vacation – was a luxury that only the wealthy could afford. This sometimes took the form of the Grand Tour, which for British tourists usually began in Dover, England, and included luxurious stops in Ostend, the Netherlands or Belgium, Calais or Le Havre, France. Other highlights included trips across the Alps…A huge vacation even by today’s standards (lederhosen optional).

Puritans in early America didn’t tend to take breaks for reasons other than weekly observances of the Sabbath, and in fact, breaks were frowned upon. It’s easy to see our society has held onto this attitude at least in some respect – we don’t travel like we should!

One reason Europeans seem so much healthier than us? They actually use their vacation – or as they call it, holiday. Most employers give employees 4-6 weeks per year of said holiday. Now keep in mind, tax rates over there near 50% and gas prices are $5/per LITER (or roughly $10/gallon). So, don’t get too jealous just yet.

We can still mimic the healthy benefits of vacation that the Europeans have perfected.

As a physician, I feel perfectly guilty taking a vacation – and that is something I have to clear out of my own head. I have patients who get very upset I would ever think to be off when it’s their turn to come into the office. Before and after I leave, I bust my toochie to get things cleaned up.  I have to find coverage at three different hospitals. Plus, I have to do all the usual pre-trip mom things: pack the kids, find a dog sitter, make sure everyone’s paperwork is in order. I know many women feel the same way – you almost wonder if taking a vacation is even worth it!

But think about this: Getting AWAY and having down time is akin to meditation. It resets you by breaking your stress cycle. I know that self-care is important to the parasympathetic system (the same system promoted in yoga classes). In addition to the normal rest and relaxation benefits (decreased cortisol anyone?), immersing yourself in new experiences and cultures can promote better family bonding and increased feelings of overall well-being. So, taking a much-deserved holiday will promote better sleep, digestion, and mental health? Um, who couldn’t use some of that mindset medicine?

At the risk of upsetting some, I am vastly opposed to the idea of a “staycation.” That’s like trying to craft your own Robitussin at home. When I’ve tried that – I ended up reorganizing the pantry, sock drawer, and weeding. Hardly a ‘-cation’ by any stretch.

I prescribe that every woman should take four different “doses” of vacations:

Vacation is Easier than You Think!

Worried about cost? Who isn’t! I found several small weekend retreats that were very reasonably priced – these would be outstanding. Outside North Texas, near Sherman, is a meditation retreat that is incredibly priced. Worried about time? I suggest that even a WEEKEND (or for shift workers a couple of days) for yourself – scheduled, planned at the beginning of the year. You can also start your “vacation year” now!

Most Americans have about two weeks of vacation time. Try breaking it down like this: plan two 5-day holidays with the family and your partner. Then that leaves two long weekends for your friends and yourself. The following year, mix it up and reverse it.

Did I mention that my first vacation alone with my husband in SEVEN years (since the birth of our first child) is happening in 6 days? I suffered from a terrible case of getaway guilt and an appalling shortage of self-care. My cure is to make a conscious effort to follow the above dosing schedule, because I believe it will positively impact my mindset, and thus my health.

So, plan four distinct vacations, get a good dose of some Vitamin “V” …and call me in the morning. 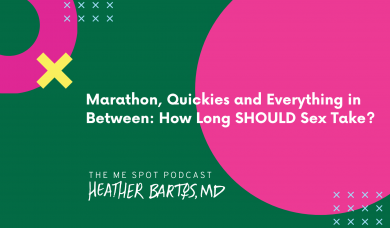 Marathon, Quickies and Everything in Between: How Long SHOULD Sex Take? // February 3, 2023

How much time should sex take? Should we be having long Avatar 2 length, marathon-type romps, or should we focus …